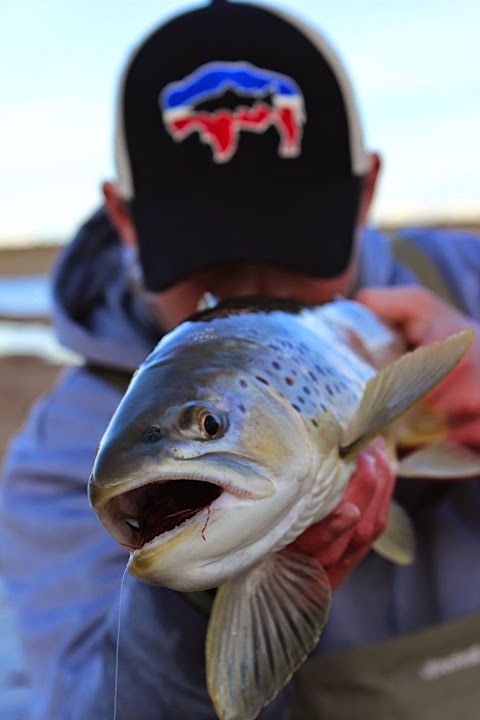 Both of us relaxed, knowing that we had gotten what we came for. Countless casts yielded fine fish, and many pictures to take home. It's amazing what we do for these fish; call it crazy, but it's an amazing feat every time we get to put such a creature in the net.
Posted by Jake at 7:57 AM No comments:

Needless to say, it's been awhile. Between all of the joyous things that accompany preparing for college, and now being a full-time college student, I'll be the first to admit that I don't have much in the way of free time. I've had at least one exam (sometimes two or three), every week since September 29th. I bring home an average of 4-6 hours of homework per night. Get the point? Yeah, free time is hard to come by.

Having said all of this, I want to start fresh, if you will. It's been a long time since my last post on here, and I guess you could say that I kind of miss it. I love the ability to write about my adventures in the amazing sport of fly fishing, and as I sit here at my fly tying table during Thanksgiving break, I couldn't help but think about writing another post.

I suppose it's not exactly an opportune time to get things rolling again, seeing as I now live in Wyoming, where nearly every bit of water is now frozen solid. However, I have plenty of fairly recent stories to tell from before my move to Wyoming, many of which include some rather nice fish. So, without further ado...

It was a blustery day to say the least. Upon our arrival, it was evident that the water was significantly lower now than ever before, and that fishing might be a bit challenging. Staring through the cracks in the windshield, the ultimate decision was to be made. Water so cold that you can only manage to stand in it for five minute periods, howling winds, and, in simplest terms, not much water to work with all presented us with a tough choice. However, we hadn't driven this far to turn back around, so I'll be damned if we didn't give it our best go.

Now, I'm sure you can already see where this is going. We sat there and fished our hearts out for hours on end. Cast after cast, nothing wanted to cooperate. We would change flies incessantly, assuring ourselves that with each change of the fly, our chances of catching a monster would increase. Unfortunately, that wasn't the case. In fact, it seemed that changing flies was having an opposite affect. Nonetheless, we continued. As the sun began to sink, we were beat. Casting heavy streamers on fly rods similar in stiffness to telephone poles all day had taken its toll.

Here is where the classic, "last cast of the day" comes into play. As the sun set further behind the mountains, I suddenly felt a tug on the end of my line; something I had been waiting for all day. Upon setting the hook, it was noted in my mind that this fish was no pushover. Runs that made my drag scream also mad my heart race and before long, he lay in the bottom of my net, admitting defeat. The fish turned out to be my biggest trout to date ~ an accomplishment that I always enjoy achieving. After quick photos and a hasty release, neither of our hands could handle the bitter windchill any longer, signaling the end of the day. It was a promising event, and one that would lead to a stellar day of fishing come daybreak.... Stay tuned for the rest of the story!

Summer. It's a busy time for most of us, filled with long days at work, with little allowance for free time. So, when the opportunity arose to spend a weekend camping with my friend Trevor, as well as with my brother, I couldn't let it pass me by. We enjoyed hotdogs over the grill, lots of laughs, and plenty of fish.

Trevor managed his first fish on the fly, and then proceeded to catch many more eager little bass. I, on the other hand, used some time to pursue carp, and succeeded a couple of times. Here are some pictures from the weekend... Enjoy!

This weekend signaled the arrival of the annual Fly Fishing Show in Denver, and while it went by far too fast, it was a great time! As always, it was great to hang out with some old friends, as well as meet new people that were either interested in the sport, or veterans in the craft. I have a few pictures from the show, but most of my time was spent behind the tying bench. For more pictures of the show check out the Hopper Juan! 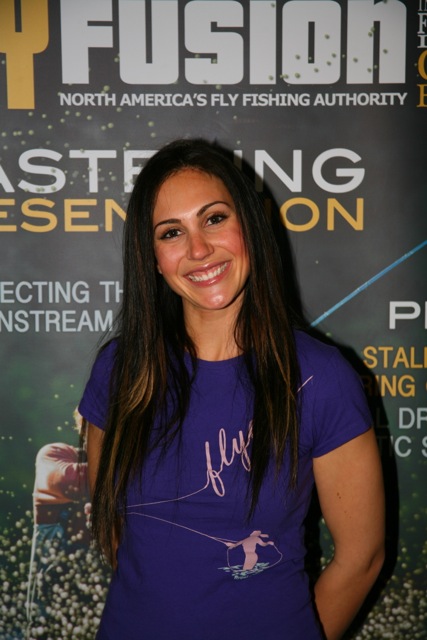 April Vokey made an appearance at this year's show... 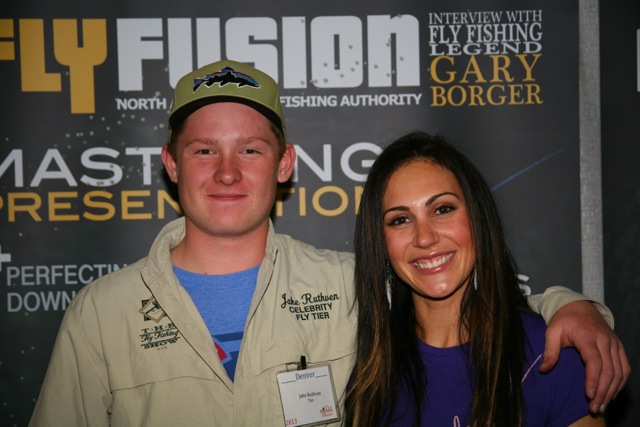 Hey guys. I have received a tremendous amount of support from all of you in fighting the district on their decision to cancel the fly fishing club. I have been busy working back and forth with them, thus the sparse amount of updates on the situation. Thanks to countless letters from all of you and a little bit of fighting spirit, we were able to convince the district to let us continue meeting as of now. While we don't have as much freedom as before, the solution will work for the time being.

I did talk to 9 News, but as we all know, the news can damage your cause just as much as it can help it. I made it clear that I wanted to work on the issue a little more by myself and at least try to figure out a solution before jumping right into a national television rant.

For now, we are doing well. To those of you who wrote letters to help the cause; I very much appreciate your kind actions in doing so. Those letters were an immense help in gaining back our club. I appreciate all of the support, as do all of the other members of our club, but as of now, the situation is under control.Thank you for your time and support.

Best Regards,
Jake Ruthven
Posted by Jake at 11:25 AM 3 comments:

In need of some help

As most of you know, I am a high school student in Fort Collins. Ever since my freshman year, I have been fortunate enough to be involved with the Fly Fishing Club at the school. Through the club I have formed valuable friendships with students and teachers alike.

So, as of yesterday, the school district informed me that it has cancelled the fly fishing club, and has prohibited any meetings from commencing due to the "Inherent danger associated with the sport". Now, I don't know about you guys, but that is a load of crap. We can have football but not a fly fishing club?

That is where you guys come in. It would be amazing if at least one of you was able to find the time to write a short essay regarding the benefits of the sport of fly fishing, reasons behind keeping the club, etc. In short, just try to write a paper that would help build my case as to why the Fly Fishing Club should not be shut down.

I know how much he sport means to me, as well as how much it means to all of you. Having a school prohibit its students from having a club that many student's love is absolutely ludicrous. Please feel free to eMail me at jake_ruthven@hotmail.com for more information.

Thank you, your help is much appreciated!
Posted by Jake at 10:59 AM 14 comments: 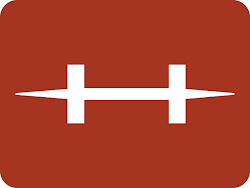